As I mentioned, I am the proud gestator of a 20-week pregnancy. In the matter of Girl vs. Boy, we have an update! This week’s sonogram showed… let me put it this way: my new-to-me velvet maternity overalls are awesome, they’re comfortable, and they’re BLUE! That’s right! It’s a BOY!

Well, not a boy, really, as much as a 20-week male embryo. Say, that reminds me. Want to know something that is illegal in Germany? Besides running out of gas and/or telling a patient the sex of the fetus she’s carrying before the 14th week of pregnancy*? Now, newly illegal in Germany: circumcision!

Aargh, Germany, why the excellent energy policy but the totally fucked up approach to personal liberties? I keep trying to imagine myself making my case to the German authorities: ‘I want to cut off a piece of my son’s penis. Well, not me, exactly, I want someone else to do it. No, not you, someone who knows how. No, I don’t know anyone who can do it – we’re not part of a synagogue or mosque here. No, we’re not proposing circumcision for religious reasons – we’re not Jewish anymore since you guys killed all of my Jewish relatives and we fled the country. Oh, still sensitive? Me, too! How about you stop making Jewish traditions illegal, and we’ll stop cutting off pieces of our kids’ penii** just to spite you and your stupid laws? How about that?’ (For the record, I might be pissed at Germany but I still hate that Toby Keith song about how freedom ain’t free. I appreciate the American approach to freedom, yes, but I do not appreciate the American approach to absurdly repetitive lyrics and the use of crowd-baiting 9/11 references to sell albums.)

In good Germany news, the walnuts are newly harvested and fantastic right now, and this week I lucked into some spanking fresh kumquats that are making my day. Also, I just ate a chocolate cookie to celebrate my first-time-in-months 25-minute run today. Yum. Tonight Tobias is cooking sauerbraten, a marinated beef dish. The recipe suggested that the beef could be marinated for up to three weeks (not a typo!), but he’s opted for a conservative 30 hour marinade. Thanks for not killing me with rotten beef, by serving it to me for dinner or by making me smell it in the fridge for three weeks!

Anyhoodle, we’re happily (sometimes even smugly) anticipating the arrival of a little boy, and are taking suggestions for names. Tobias, Jr.? Jogi?

Frida and Tobias and I had a wonderful time in Colorado in late September, and a very energetic week in New York in early October. Here’s Frida taking it all in. 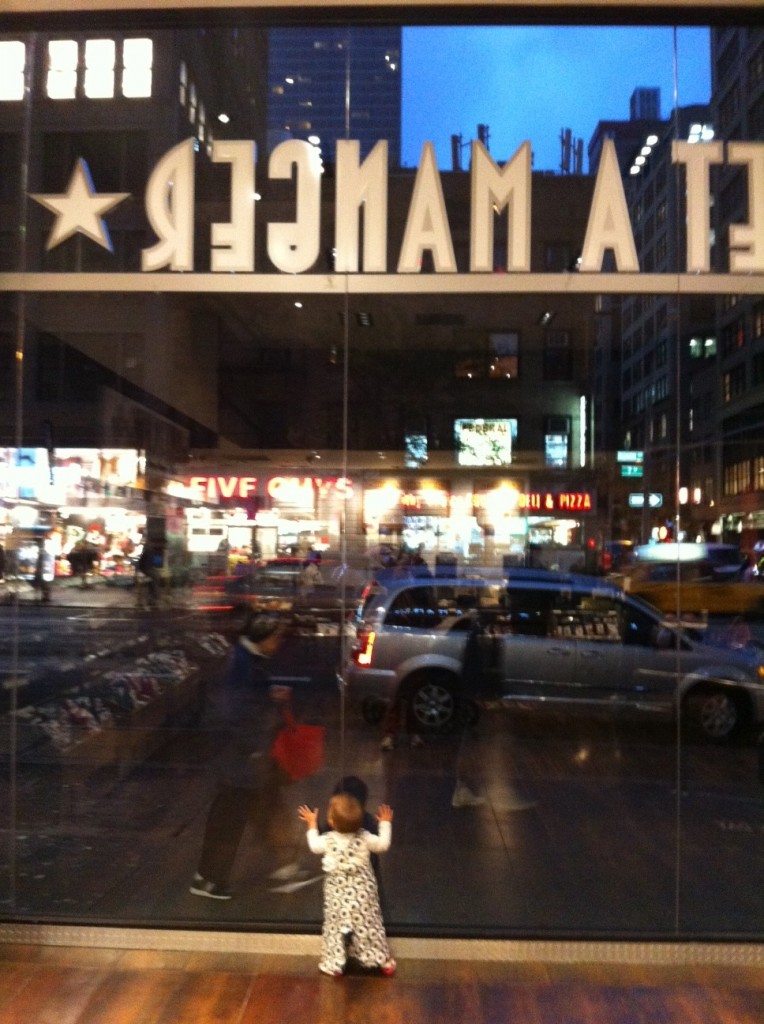 *p.s. For fuck’s sake, Germany, this is NOT the way to address the issue of sex-selective abortion, which isn’t even an issue in countries where women are valued at roughly the same level as men. Imagine a woman who was pregnant and who was feeling so much pressure to have a male child that she was willing to abort her pregnancy if it were female. Do you think that denying her information about the sex of her fetus until late enough in the pregnancy that abortion is no longer legal is going to help her problems? All you’ve done is force her to either have an illegal, unsafe abortion instead of a safe, legal one, OR to have an unwanted female baby (hint: the latter course doesn’t end well for the baby OR the mother.) I’m thinking that any situation that puts so much value on male children over female ones isn’t such a hot deal for any of the females involved, and that any effort spent by the great state of Germany should be on treating the causes of gender bias rather than on punishing the women involved. (And that, if you’re wondering, is what I said in my head to the doctor as she was performing my 12-week ultrasound and explaining German law. What I said out loud was, ‘That’s not going to help.’ Succinct, yes, but not at all to the point.)

**I know, I know, it’s not penii, it’s penes, but penes is such an ugly word, and penii is fun! Like Hawaii and Pompeii!

p.p.s. Forgot to metion: Frida’s walking! Staggering, really, but taking a few steps all by herself before collapsing in a pile of pleased giggles. Go, Frida! At this rate, she should be ready to help me carry groceries up the stairs in no time!