I can’t believe I forgot that there’s no relish in Germany. I’m back now, after a most excellent week with family and work colleagues in the U.S. Here’s what’s new:

Frida has a favorite food! It’s water. She started eating solids this week and has eaten carrots, sweet potato, and a semi-accidental bit of artichoke without incident, but she lights up when it’s time to drink some sips of water.

I found a muscle in my stomach. While sneezing, yes, but it still totally counts.

On a city bus yesterday, we swerved to go around a stopped truck and found another city bus blocking our way. I was like O shit what now? until our bus driver put the bus in reverse and backed out of the way. I guess I didn’t think that city busses could back up. Funny, the uninspected assumptions you carry around with you. (p.s. I might just need more sleep.)

After a mere 7 days in the U.S., the first thing I noticed in this little end-of-the-street park was the metal slide and its ability to burn chubby little legs. Then I remembered that we were in Hamburg, and that this slide was never going to get hot enough to burn anything. That’s why they provide rope netting to climb aboard the pirate ship on the left: try to get up there without some rope burn! The red pump in the right of the picture, with the various troughs for water to run through, is a popular feature in Hamburg parks. Kids build dams with sand and whatever else kids build dams with, and they learn about hydrophysics and about how things that make you clean can also make you dirty. 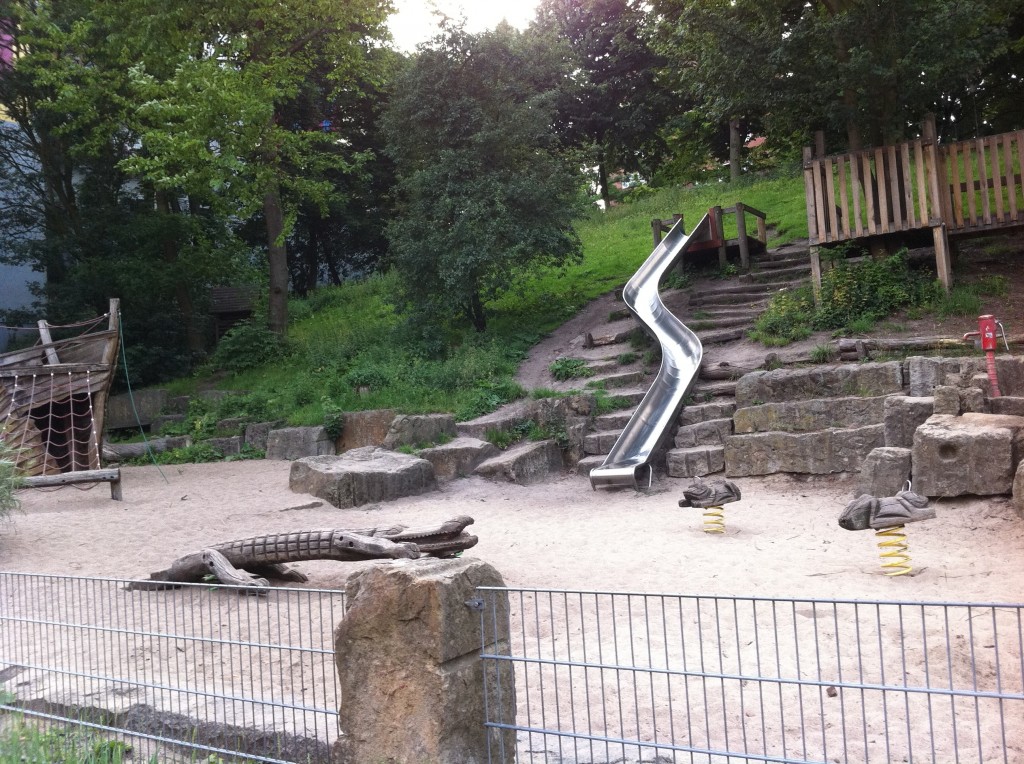 20 Fun Ways to Chip a Tooth

Yeah, that’s a wooden alligator. Or crocodile. The things on springs are sightless frogs with brackets on their heads. And please note that the rope around the top deck of the pirate ship is just about at knee height. (So that while the kid is having stapled-frog nightmares, the mother can spend some nice quiet sleepless nights thinking about how to teach a toddler not to trip on knee-high ropes.) Aargh, matey, I’m not ready for playgrounds.

In home news, guess which one of Frida’s parents makes dinner time a pleasant-smelling activity that focuses on ingesting nutritious food, and which parent actively encourages the babe to make pterodactyl noises while smooshing carrots into her eyelashes? Hint: Germans are cleaner than me. They just are. Somehow Tobias makes the bib look like a charming baby scarf whose main function is a visual cue in ‘baby’s first meal’ pictures, and I make the bib do its fucking job. Do your job, bib, so I can keep playing with the baby and her carrotty cheeks. Aww.