The baby didn’t poop for 8 days. Then, today, she pooped in 8 different diapers plus once on the changing table. It’s time to play…

how to play:
Sometimes your touchstones crumble and you need to find a new way of saying what normal is. In the following two situations, try to figure out where 4 is on the 0-to-8 scale.

Tobias mentioned that he enjoyed fish paste in his youth. Fish paste, you (and I) ask? Yes, ground anchovies in a bottle. He liked to spread them on buttered bread for a fish paste sandwich. While I can get behind the idea of a salty, buttery sandwich, his description of them as ‘fishy and a little rotten-tasting’ makes me think that his use of the word ‘delicious’ could mean anything from ‘this soup tastes terrific’ to ‘not bad for a Fridge Find once you scrape the fuzz off’. What does it mean when he says something is delicious? And, dear god, what does it mean when he doesn’t?!

I’m typically not a big Easter celebrant. Sure, I’ll make the occasional lamb roast or loaf of challah (see above re: I’m typically not a big Easter celebrant,) but I’ve never gotten too much into the egg dyeing, the basket decorating, or the bunny costuming. Color me flummoxed, then, by how thrilled I am with a Martha Stewart egg-dyeing trick I tried this week: take any patterned silk, tie it around an egg, boil it for 20 minutes, and the pattern will come off onto the egg!
So, if ‘blasé about Easter’ includes the possibility that I’ve already made my poor sister watch a dramatic reenactment of the egg-dyeing via Skype and then tried to explain the process in German to my sister-in-law, what does ‘excited about Easter’ mean?! 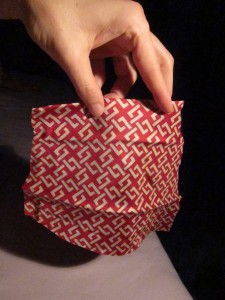 Before: a piece of one of Tobias’ old ties 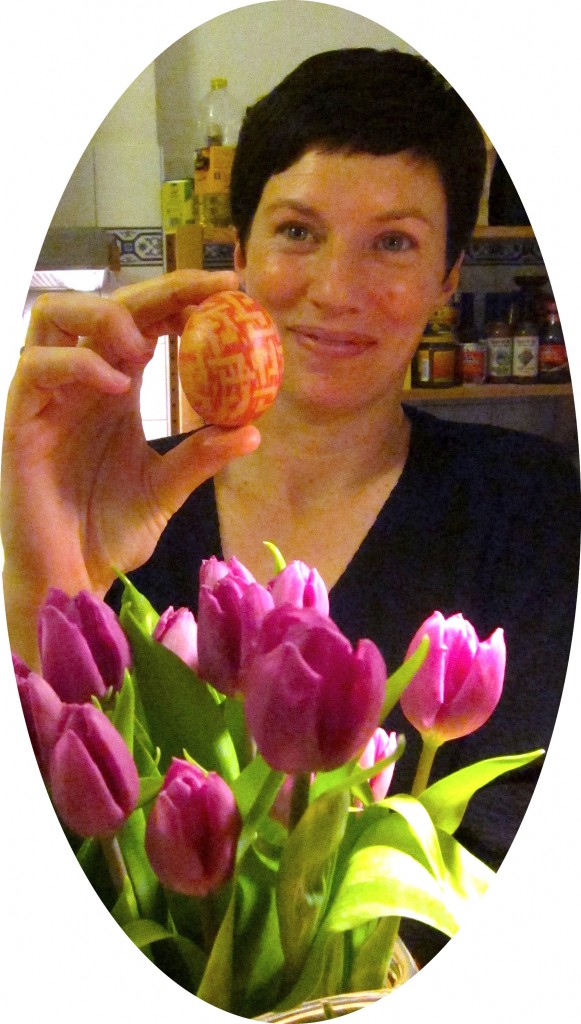 After: I made a patterned egg! And I posed with some lovely tulips!

————————————————————————————-
Rather than just leave you with this little bit of Easter magic, I will destroy the moment by adding that the water should have at least 3 tablespoons of vinegar in it, that you should tie a layer of plain cloth (like an old T-shirt) around the silk-wrapped egg to prevent the color from bleeding into the water, and that you shouldn’t expect others to be quite as excited as you are about the results. From Tobias: ‘Yes. That is the same pattern. Is it not what you were expecting?’ Well, yeah, I guess so. I just wasn’t expecting to be so delighted.