Frida, watching me put Max’s longest socks on and noting that he has two knees, suggests that they should be called ‘knees socks’.

Tobias, answering my question about our attendance at next Wednesday’s anti-G20 demonstration, patiently explains that Trump a.) is an elected official, and b.) does not care what I think (or yell and scream.)

I somewhat less patiently explain that the demo isn’t meant to change Trump’s mind (although isn’t that a delicious thought,) but to remind the consumers of the demo – neighbors, passersby, city leadership, our cops – of the importance of voting for a candidate who will do the right thing. I’m charged up, glad that my German has come far enough to talk American politics even though it’s dead easy right now: smack the forehead, explain that even with Trump out of the picture there are still millions of Trump supporters feeding off of Russian Fact Soup, say something simple about how capitalism is bad.

We are as good as we’re going to get.

My mother’s old horse got stuck, belly-deep, in wet adobe. On the farm alone, watching the horse flounder and panic in the heavy clay, she went to get a shovel, then a tractor, then a gun. She hated it, but she shot her horse as soon as she knew he was a goner. It was just getting worse for him, so she wasn’t going to let him wait until his guts stopped working, or wait until the next day when Dad got home. She’s kind, and she’s practical, and she’s tough.

My Dad is, too. So am I, although lately my toughness has more to do with opening a Tupperware container that I’m pretty sure has a three-day-old snail floating in it.

I want Frida to be tough. I tell her the Grandma-and-the-horse story when we talk about judging people on the way they act instead of the way they look. Grandma’s not just friendly, she’s strong, I explain. She does what’s right even when it’s hard for her.

It’s a good conversation, worthwhile, but sometimes I take these talks too far:

Poor kid, she’s going to end up with a prince on bended knee and me behind her whispering, “But what about grad school? The civil service? Doctors without Borders?! You’ll have more power as an Ambassador than as a princess. Tell your prince to forget marriage – wait until you’ve earned it, then nominate you as his country’s U.N. rep.”

I think we need an Amal (Alamuddin) Clooney doll! If we’re going to play dress-up, at least we’ll put those tiny, sparkly velcro dresses on a human rights lawyer.

In case you were worried that this tendency to be an overbearing asshole about race and gender politics has ruined my chances to cement my legacy as a Super Fun Mom, here’s the veggie tray I made for Frida’s recent school sleepover. Yes, pre-schoolers in Germany are taken on multiple-day school trips. With no parents. Frida’s shown herself to be totally capable with this level of self-sufficiency. Maybe she’s a little tough after all. 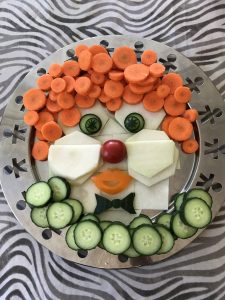 I’m a clown! My name is FreeTime!