It’s Christmas Baking Season and I’m out of ginger. Luckily, I am full of the kind of pluck that allows me to substitute chili powder in gingerbread men and then try to pass them off as a hostess gift. ‘Here! I made something that’s just for you! Because your kids will hate them.’

Frida, poor little soul, has been eating them because the only other treat on offer is 4 parts plain yogurt mixed with 1 part applesauce.

Max doesn’t have many words yet but is really starting to use signs. When offered a ChiliBread Dude, he smacks my hand away then takes off his glasses and throws them across the room. I think that means no thank you?

We are visiting preschools for Frida. The meeting at the Montessori school went about as expected, if you were expecting Frida to roll in and basically blow the principal’s mind with her ability to pour water from a pitcher through a funnel into a jar and back and then fill an entire ice cube tray with walnuts using only tongs. The entire tray! She’s 2! I know, I know, you’re thinking we coached her and yeah, maybe the 6:00 wake ups to practice carrying child-sized trays from room to room were a bit much, and maybe the child-sized broom gave her some calluses during those long hours of character-building sweeping, but it was totally worth it when the principal said that they technically are full and turning away applications until September but that she’d make a place for Frida in January because Frida was so clearly ready for the Montessori classroom. The principal smoothly moved into an explanation about school fees while I was still marveling over how Frida could, and I quote the principal here, ‘Do things that children who had been in the program since September still couldn’t do.’ Sold! Walnuts! Trays! Frida kicks Montessori ass! Wait, what? No grades? Shit, how’m I gonna be able to I tell if I’m winning at parenting?

I’ve got to go spruce up for a holiday party in a few minutes*, so this list won’t be complete, but here are the things I hate about the Curious George books:

*Is it better if this pun is intended? Or un-? Either way, what a complete nerd! Ha!

If you were ordering a whole turkey from a butcher in Italy how much would you expect it to weigh?

a.) as much as a glorified chicken

b.) so little, really, that forcing the butcher to say the weight would risk embarrassing him and might leave him with the impression that you are smugly comparing his product to the glorious size and astonishing growth rate of American turkeys

When faced with this question last week, I blithely arranged for a turkey without asking if it would take two people to carry it to the train station. It would. Over the shoulder, mind you, because it was waaaay too heavy for a bag. Its size was comically monstrous, 14.9 kilos, a wonder of a beast until I, at 5:30 Thanksgiving morning, realized that removing two legs, two wings, AND a back was the only way it was going to fit into the oven. Thanks to Laura and Joe for going on the unintentionally back-breaking errand of turkey retrieval, and for taking it well when I only cooked a third of it to feed the eight of us.

So now we’re on to Christmas, which means that I’ve been eating a lot of panettone and trying to find powdered sugar in the local grocery. There are hazelnuts in the market right now that are ridiculously good, so good that Frida wakes up in the morning and goes downstairs to try to shell them herself. As sneaky habits go, that’s a fairly safe one, I think. Speaking of things I didn’t know my kids were doing, it looks like my 25% estimation of bidet-using members of my household needs to be doubled. When we moved in two months ago, Tobias genteelly hung a towel on the bidet-adjacent towel rack in our bathroom and we said nothing of it. To each his own. Yesterday, during a busy morning, I was using the kids’ bathroom (while the kids were brushing their teeth, which means I’m some sort of multitasking, in-leaning supermom,) and when I’d finished Frida said, ‘Aren’t you going to wash your bum? Like this!’ and then she hopped up on the kids’ bidet and I realized that Max was going to have to find a different sink to play in. And definitely a different drinking fountain.

Upon re-reading, that might not have been enough of an inducement for you to come visit. How about this? It’s the walk to the restaurant we went to for lunch on Monday. 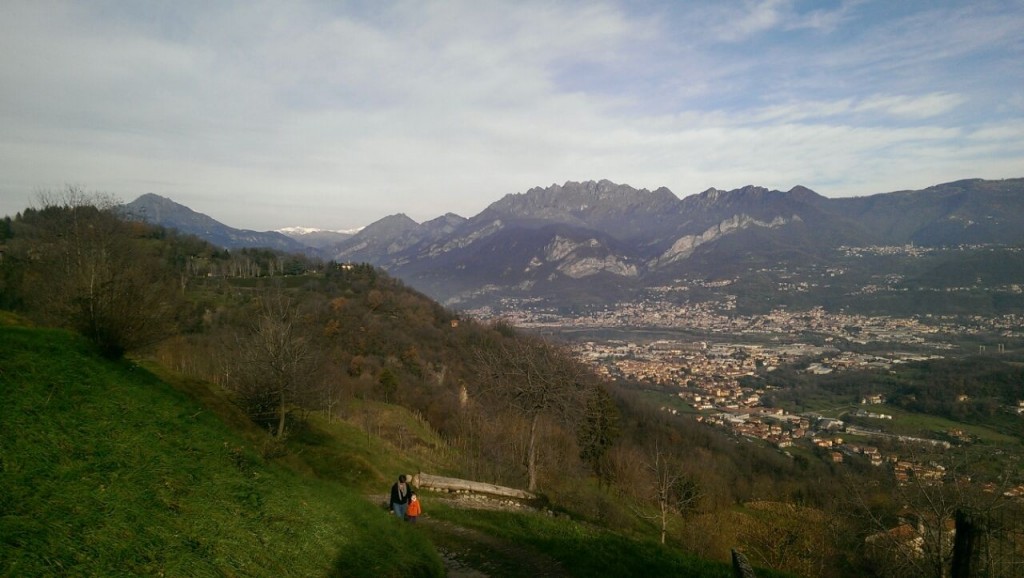 Drive uphill until you can’t drive anymore, then walk 15 minutes to the stone farmhouse at the top of the world. Pictured: Betsy, Frida, town of Lecco

The restaurant is really a family’s house, with the dining room on the second floor and the family’s living quarters on the first. They’re open only for reservations, and then have maximum 20 people and only one meal per day. The meal is 5 courses, takes 3 hours, and is both incredibly delicious and inexpensive. It is made by the wife and served by the husband, and in between courses we got to play with their three lovely daughters. The youngest of the daughters is eight weeks old, which means that the cook/cleaner/farmer/sausagemaker/baker/hostess had a baby in a pram with her in the kitchen, and took a pause every once in a while to breastfeed. Running a farm is hard. Running a restaurant is hard. Parenting a newborn is exhaustingly hard. Wow. Well done, Italian farm family!

The people that we went to lunch with were mostly Lithuanian, which must be the European equivalent of the U.S.’ midwesterners because when I said, ‘Can we go wash the dishes so that she can put her feet up?’ my friend laughed and said that she was thinking the same thing. We didn’t end up washing any dishes, though, instead thanking them profusely and promising to be back.

So, come to Italy! Marvelous views, wonderful food, hardworking people, and dishes that maybe they’ll let us help with next time once we get to know them a little better!

Today, donations to CFC International are matched! Click here to go to the donation page. The money raised today will help fund the CFC Parent’s Guide, which we have used, our families have used, our doctors have used, etc. etc. The organization is focused on concrete things that help kids and families: gathering expert advice from an international team of physicians into a series of digestible guides, funding research that will help us make decisions about Max’s care, and coordinating a conference that brings together not just families but also the physicians and geneticists who can help those families with their CFC-specific questions.

I am someone who is grouchy on the subject of the efficacy of internet ((hugs)) to ameliorate a genetic condition, and who finds that being exhorted to ‘raise awareness’ of a very rare and untreatable genetic defect akin to being asked to ‘pray’ for ‘homosexuals’ (Um, OK. Are we aware enough yet? Did CFC/Noonan’s Syndrome go away? Or, Are the gays married yet? What, wrong prayer? My bad.) CFC International, by contrast, actually gets something done and I am grateful for their work.

If you can, please donate today. 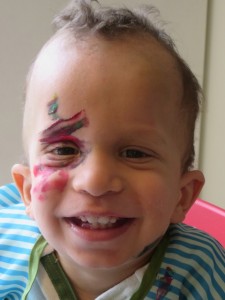 More info on CFC International is on their website here.