Frida has been requesting dance music lately (and, as she doesn’t say much yet, to communicate this particular wish she raises her arms, pretends to snap her fingers, and wiggles her hips while singing ‘do-da’. Works every time.) The frequency of the music requests means that we’ve been digging pretty deep into the back of the CD drawer; we’ve started listening to some of Tobias’ more, uh, method jazz and to the second volume of Best of Cumbia. It was on the latter that the singer sings, ‘¡Baile hasta las nueve de la mañana!’ Which means ‘dance until nine in the morning!’ Oh, Mr. Cumbia Singer, you have gone too far. Baile hasta las cinco de la mañana? Sure! I’ll dance, have danced in fact, until five in the morning. Baile hasta las seis de la mañana? Well, OK, we’re going to be tired tomorrow but we’ll just go for breakfast after this last cumbia and call it a night. But hasta las nueve? Seriously? Why are we still dancing the cumbia at 7:45 in the morning? At 8:12? At 8:45? My feet hurt! I just noticed that your breath smells – you haven’t brushed your teeth since we started dancing yesterday evening. I’m hungry, I’m tired, and my makeup looks ridiculous now that it’s closer to noon than dawn. Next time, let’s call it a night while it’s still night, por favor.

Want to know a neat trick to make your food taste like restaurant food? Add a dash of cream to pretty much whatever you’re making (soups and egg dishes, obviously, but also salad dressing, tomato sauce, etc.) and don’t use black pepper. I was shocked at how different things tasted when I held off on the black pepper. Don’t get me wrong, it has its place, but I had been automatically adding several grinds of pepper to pretty much everything, and it’s refreshing to taste things on their own.

Another few things to try:

And a few things not to try:
************
Surprise of the month: smear anchovy paste on a piece of lamb before roasting it in the oven yields a delicious, savory crust. You’re skeptical, right? You’ll be skeptical through all the stages of this recipe (particularly the one about three minutes after the anchovy paste hits the hot air in the oven,) until you reach the stage where you sneak a piece of the brown crusty bits as you carve the lamb. It is exceptionally tasty. A recipe is here; let me know if you want me to mail you some tubes of anchovy paste – they last forever and are the secret ingredient in some dynamite dips and salad dressings, too.

So, that was April: I realized my cumbia limits without having to leave the house, and I learned that one tube of anchovy paste is not, as previously assumed, a lifetime supply.

On Friday I was tired and I wanted pudding. Tobias had been in Moscow the night before and had yet to return home, the wonderful babysitter was in London for a long weekend, and I was unaccustomed to pulling night diaper/nurturing duty in addition to full-day diaper/nurturing duty. So, with the two little darlings sleeping simultaneously at last, I made and ate chocolate pudding in the 45 minutes before my mother-in-law’s late Friday evening arrival from south Germany. And just as I was thinking, ‘You didn’t use that time to make up the guest bed and/or get dinner ready? Why so passive aggressive, Bets?’ – just as I was thinking that – my period started. That’s right, folks, 7 short weeks after giving birth (and also 15 short months after giving birth,) and while breastfeeding full time, my period started. ‘Cause you know what I need right now? PMS. And an additional bodily fluid to deal with. And also to get pregna… ack I can’t even type it.

This letter is in response to your recent question, artfully posed as a period. Much as I love a good pun, and a punctuation pun at that, the answer is no. Or, rather, NO. THE ANSWER IS NO. As in, I Am Immune to Your Ovulatory Charms NO. As in, The Countdown to Menopause Begins Now NO. As in, We Have A Vasectomy Appointment Friday NO.

I hope this won’t make things awkward between us.

p.s. I do find your confidence in me completely charming. The answer is still no.

Does your deodorant have an expiration date? Mine does, and it’s this October! I’m not the most hygienic, but I never thought I’d end up the kind of person who lets her deodorant expire.

In other deodorant news, the user is warned to keep the product away from eyes and from their ‘schleimhaute’. This translates to keeping the deodorant away from your slime skin. I would make some crack about what an ugly, yet intuitive, language Deutsch is, but the term ‘mucous membrane’ ain’t exactly purty neither.

This week, sick of cabbage, I ordered the Mother and Child vegetable box from the CSA organic grocery delivery service rather than my usual Local Produce box. The Mother and Child option, sometimes called the Stillen (Breastfeeding) box, purports to contain only those foods that do not produce gas, to which Max and I say, ‘Challenge accepted!’ There are various size options, I opted for the medium-large. It came on Thursday, bringing carrots, fennel, mache, sweet potatoes, parsnips, one kohlrabi, some mushrooms, an avocado, and spinach. And by spinach, I mean SPINACH. Two pounds of spinach. It may not sound like much, but this is the box that just the spinach came in and it was completely full: 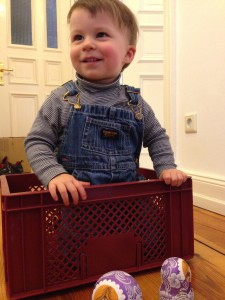 to be fair, that is one tiny farmer!

A little context: the spinach, like nearly all spinach sold in northern Germany, is fresh, attached to the root, and is unwashed. It varies from quite clean to unbelievably gritty, an invariably needs two or more washes before use. I don’t know who the grocery delivery people think they’re dealing with, but I do not outsource the procurement of my family’s nourishment to complete strangers because I have too much time. I arrange for grocery delivery because I feel that I have too little time. I think it’s safe to say that the average recipient of the home-delivery Mother and Child vegetable box does not feel that she is awash in leisure time. Awash in dirty diapers, crusty nursing bras, and mismatched baby socks, yes, but extra minutes in the hour before dinner needs to be consumed? No. So why are you sending us four sinkfuls of dirty spinach? Next time, how about sending something clean that I can snack on one-handed. Like a beer.

Disclaimer: the spinach is now washed and in the fridge, ready for use. It’s nice to have Tobias home! And, yes, the grocery delivery service does deliver beer.

I imagine that many parents, first-time or otherwise, look at their little treasures adorably doing something like kicking a ball and picture the moment on the highlight reel shown during the (now big) treasure’s induction into the Football/Soccer Hall of Fame. It’s hard not to document the moment just in case. With that, I bring you: 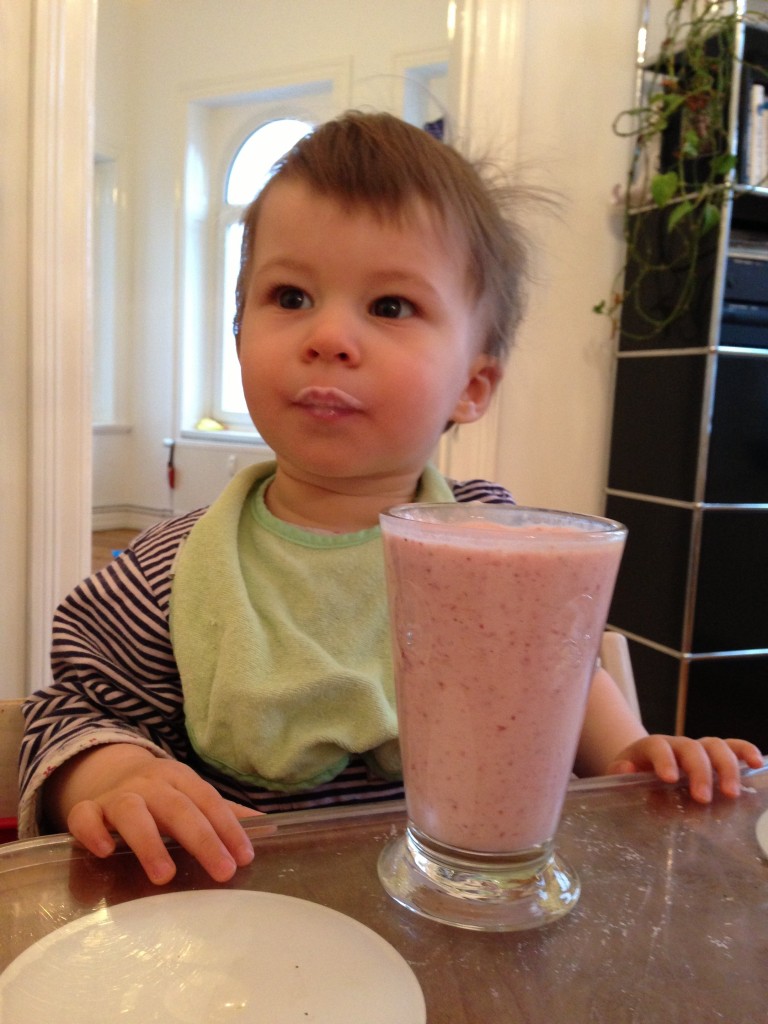 When Tobias, all stricken, announced that this week’s one-day work trip to Moscow had been turned into a Monday-through-Thursday sojourn to Moscow and Kazakhstan, my first thought was not, “What will I do when Frida (aged 15 months) and Max (aged 5 weeks) are both awake and screamy in the middle of the night?”, nor was it, “Oh, how difficult for you, Tobias! Two night flights in the same week when you already have an accumulated sleep deficit the size of Charlie Sheen’s!”, it was, “Kazakhstan? Are we even trade partners with Kazakhstan?” Which is why the engineering firm where Tobias is something like Viceroy of Europe, Energy Division, chose as their international representative one T. Rosenbaum rather than his wife. Apparently my skills are more domestic.

Ha! Seriously, though, folks, let’s talk about fancy homemade cookies and a great new casserole recipe, shall we? Yes, let’s.

Tips of the week:

*I am assuming you don’t make marinara from scratch every time you need it, preferring instead to use that kind of quality time reading the internet, and that you either spent many happy hours last August canning marinara or that you are familiar with the commercial availability of canned tomato-based sauces.

Ah, yes, and what would this post be without a referral to the source recipes for the macarons and eggplant parm, located, of course, at MarthaStewart.com. It is noted that Ms. Stewart, in addition to various kinds of fluffery related to homemaking, served on the board of the New York Stock Exchange, and that her husband introduced the Gnomes book to the world. I find her difficult to hate.

This post has been edited to reflect the correct spelling of Kazakhstan, (I had an i in there somewhere,) and to announce that my ignorance is not the fault of my dear mother, who excels at both history and geography, nor my father, whose college girlfriend later served as the U.S. Ambassador to… wait for it… Kazakhstan! Small world, indeed.

Let’s begin with the accomplishments: not only did I leave the house yesterday with both children, I also enjoyed some social time with a good friend, lunch with my husband, and a jog in the sunshine. This means that I soundly met the day’s goal of not killing myself or my children, right? Not so fast. Not only did I leave the house without the keys required for re-entry, I also left the house wearing jogging gear. This meant that I was warm enough while jogging, but not warm enough while not jogging, which means that the 20th anniversary edition of the movie Speed can now claim to be ‘based on a true story’. The story of me wearing sneakers, a sweaty hat and and a stinky jogging fleece to the business-suited island where Tobias works. The story of how my either-of-us-could-be-the-breadwinner-we’re-both-very-capable-people-it-was-just-the-breastfeeding-issue-that-meant-that-he’s-working-instead-of-me credibility took one in the chops when the apartment door clicked shut behind silly little old keyless me. The story of the kids really enjoying their stroller ride for the first hour; not so much enjoying the fourth-fifth hours. The story of how mean old German ladies are actually quite nice when both of your kids are crying piteously on the bus ride home. (Note: they are nice to the children, with an overt what-has-your-stupid-mother-done-to-you vibe.)

Today was a day that featured a well-deserved and thoroughly enjoyed three-Rosenbaum mid-morning nap. ‘Nuff said.