Here is a smattering of the week’s hot topics:

In answer to your burning question, no, I did not make it through an entire weekend eating only the foods that Frida ate. I broke down each day sometime after lunch either through chocolate, salted nuts, or some combination, as in this first-of-the-festive-season plate of white chocolate treats I made to welcome my (possibly diabetic?) neighbor home from the hospital: 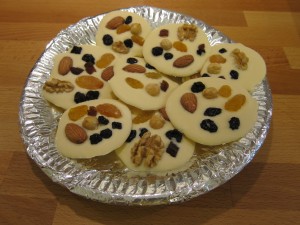 On a healthier note, I accidentally used three cups of rye flour instead of three cups of wheat flour in the bread for the Smörgåstårta, and it still came out fine and was relatively easy to slice: 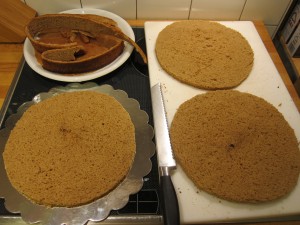 Turns out 50% of the baby shower attendees, including all four of the ladies, were pregnant! The first layer was salmon-themed, with half beautiful smoked salmon and, on the other portion, a half-assed salmon mousse with lots of black pepper (white-wine-poached salmon, dill, mayo, and whipped cream, but no gelatin because we were eating it in a cake, not as the molded-into-a-mermaid centerpiece of a 1972 3-martini brunch): 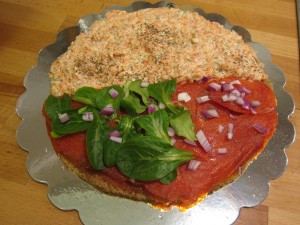 The second layer was shrimp, except that 1/4 of it was egg salad for the shrimp-averse. Shrimp salad (boiled rock shrimp, celery, mayo, chives, and lemon juice,) is freaking delicious and makes me want to keep shrimp on hand in the freezer at all times. Also, it’s pretty: 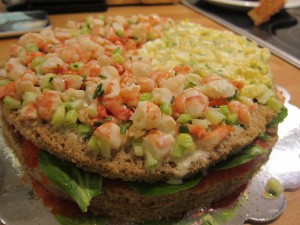 Shrimp allergy? No problem! Wait, how allergic are you?

And then came the third layer of bread and the cream cheese/sour cream mixture (erroneously billed as sour cream/mayo in the previous post, which would have been gross. Cream cheese over mayo any day!) 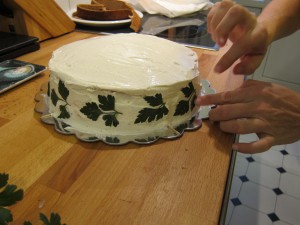 How is that I'm only now realizing how mid-20th-century this whole enterprise is?!

Then, things turned unintentionally Christmassy, in a dilly shrimp way: 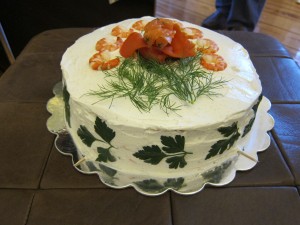 Oh, you’d like an eyeful of that sweet action? Here you go: 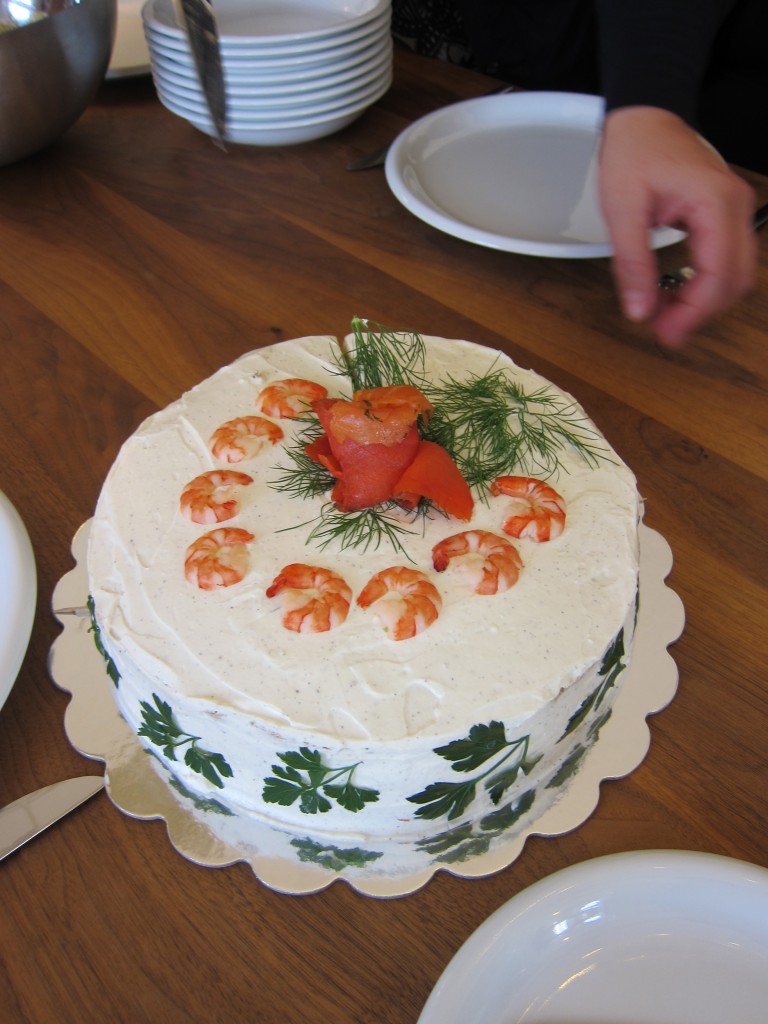 and a smoked salmon rosette for the non-pregnant menfolk

So there we have it. Smörgåstårta. Here’s what we’ve learned:

Here’s the recipe I used for the Smörgåstårta bread, frosting, and layering instructions. (Except for substituting rye flour for the white flour, and molasses for the ‘dark syrup’.) For filling, I think that you could use anything that you’d put on a bagel, especially if it has little crunchy bits in it (onions, celery, cucumber, etc.) The assembly instructions call for moistening the bread layers with sparkling water. I did this, and would definitely recommend it if you’ve made the bread in advance. Even though I made the bread the same day, the extra moistness helped keep the cake together when it was sliced for serving. If you end up making one of these, or something vaugely similar, please let me know! Also, if you went to any smart brunches in 1973, let me know if I’ve recaptured the essence here. Next up? Devils on Horseback!

Frida’s Oma is here for the week, which means that there’s another set of hands to carry parcels, cook good food, and clap along with Frida. I have taken great advantage of this situation by doing things like buying grapefruit instead of my usual kumquats (have I mentioned the stairs to the flat lately?), stashing a paperback book in the diaper bag just in case I get a minute to read, and going to the bathroom without a squirmy toddler on my lap. All was well and good until I remembered that Christmas season is nigh upon us, and that the local fancy foods warehouse is but a few blocks away.

So we went, in the pouring rain and whipping wind, to stock up on another kilo of cocoa powder and to buy a few kilos of salt for a salt-baked fish. 90 Euro later, I was watching Oma and Frida disappear up the steps to the apartment and trying to figure out how I was going to carry 6 pounds of salt, a kilo of cocoa powder, a huge jar of peanut butter, and 12 pounds of best-quality white and dark chocolate up the stairs. The answer? Cuddle the chocolate like it’s a baby, and go quickly so that your investment doesn’t melt on the way up.

Once we were safely home, I started to look up recipes for white chocolate so that I could justify the purchase to Tobias, who is still wondering what happened to the last kilo of cocoa powder, and found that most recipes call for between 8 and 10 ounces of white chocolate. I’ll let you know our favorite of the 14 recipes I now have ingredients for. (And am open to suggestions!) This story has already taken an unfortunate turn – I am amassing such a list of white chocolate ideas that I now use shorthand for the key ingredient: W.C. Sounds delicious, no?

In only somewhat different news, I highly recommend making wine-poached apples. The recipe I used called for star anise, cinnamon sticks, and cloves, and the leftover syrup was fantastic in yoghurt – it tasted like spiced apples in a way that the commercially prepared ‘spiced apple’ yogurt just doesn’t.

Oh and hey, if you’re wondering about the yoghurt vs. yogurt thing, it’s simple: the added H is included for health-affirming plain yoghurt; the pudding-adjacent presweetened variety is H-less. (Again, Betsy totally sticks it to The Man, this time by making up her own spelling rules. Power to the People! Yeah! or Yea! You decide!)

Here’s the thing I want to talk about today, though. Smörgåstårta! A savory cake made of rye bread, smoked salmon, shrimp, cucumbers, mustard sauce, etc., frosted with a combination of sour cream and mayo, and decorated with all of the little radish flowers, carrot curls, shrimp stars, and parsley bouquets my little heart desires! I went a little bit bat shit crazy at the seafood store today, and am planning to go even crazier at the sour cream store tomorrow. I am making the cake for a baby shower (because lightly smoked seafood in a non-traditional, what’s-in-there-again? presentation is surely a safe bet for any pregnant woman,) and am freaking thrilled by the prospect. I’m planning to make a couple of Smörgåstårta cupcakes, too, for an attendee who doesn’t eat shrimp. I need to go start reigning myself in before I decide that the grapes in the fridge need to be used, that they need to be used in a chicken salad, and that the chicken salad needs to be a 4th layer of what is sure to be a structurally suspect production to begin with.

I’ll report back, hopefully with pictures, but there are a couple of disclaimers before I begin:

p.s. if you’re wondering what to get me for Xmas, a toothbrush is a pretty safe bet.

A new installment in our recurring segment:

Guess What I Just Found Out Was Illegal in Germany?

And guess what’s legal in Germany?

(Note: best not to look for a theme in the list above, ok?)

Other things that I find surprising:

Oh, Germany, sometimes I’m not such a huge fan of you and your regulations, and it about kills me that the only way that I’ll be able to effectively lobby for meaningful change is to  learn fluent German*. Aargh, the irony**!

*As opposed to my current level of German fluency, which is limited to food- and pregnancy-related present tenses.

Murdoch’s Farm and Ranch Supply is a store on Colorado’s rural Western Slope that sells Carhartt coveralls, a large selection of work boots and gloves, most of the farm tools you can think of, and, stacked by the entrance, a wide variety of salt and mineral blocks for everything from horses to deer.

Guess what Murdoch’s Farm and Ranch Supply and the Lufthansa Airport Lounge have in common?

They both have diaper changing tables in the men’s bathroom. Wahoo! Hey, Lily Ledbetter, things are looking up!

Guess what IKEA doesn’t have? Replacement lightbulbs for their horrifically poorly wired inset kitchen lights. They are also out of stock (permanently) in the GRUNDL drying rack that I want for storing baby bottles, and, oh, yeah, they don’t have a changing table in the men’s room.

And that is how I wound up with a kilo of frozen IKEA meatballs. There’s no such thing as a quick trip to IKEA, and damned if I was going to burn three hours going to IKEA just to leave empty-handed.

How did I end up with two boxes of imported-from-the-U.S. macaroni and cheese mix and one small can of Clamato? Same story, but this time at the huge downtown Kartstadt department store: they, too, were out of drying racks, and they don’t carry replacement lightbulbs, but they do have an Amerikan aisle in the grocery department on the second floor.

After this processed food influx, I’m going to go on the baby diet for a while (no, not the pregnancy diet. As discussed, I’ve been on that pretty much continuously for the last year and a half.) Rather, I’m going to eat like Frida: she doesn’t eat salt yet, and she doesn’t eat sugar, so she thinks that getting to chew on an artichoke leaf is about the biggest treat there is. She loves plain yoghurt, she lights up when it’s time to eat some kiwi, and she can eat fifteen spoonfuls of plain oatmeal in a row without complaining.

As I was microwaving some factory-frozen meatballs for lunch the other day, I made Frida some steamed fish with fennel, sweet potato, and a squeeze of tangerine juice. As I was microwaving some more factory-frozen meatballs for my dinner, I made a quick apple-and-Gouda sauce for Frida’s broccoli and cauliflower snack. Frida’s eating squash, I’m eating mystery meat from a store famous for its wafer-board furniture. It ain’t right.

The same goes for sweet treats: I feel guilty when Frida eats a whole banana, because it has a lot of natural sugar and now she might not be hungry enough to eat the right amount of protein and calcium, but somehow it’s just fine for me to eat four cookies? As though I can route the sugar to my legs and arms and route only cottage cheese and leafy greens to my uterus/placenta?

(Quick question: whose placenta is it, anyway? Is it the fetus’? Or is it mine? Finders keepers?)

Anyhoodle, here goes a weekend where I eat only the foods that the baby eats. I’ll report back!