The most recent additions to the steaming pile of proof that my daughter’s proficiency in the art of living gracefully may not have come from her mother:

And that was how I learned the word for dishwasher in German. The end.

I bit into a carrot today and realized I had forgotten there was a difference between crispy and crunchy. A crunchy carrot sure beats the alternative, but when you bite into a crispy carrot it shatters into a bunch of little pieces of freshness that shatter some more when you chew them. Awesome.

It is sunny and warm today in Hamburg.

The leftovers from last night’s dinner (a pile of savory crepes with layers of smoked salmon, spinach, barlauch, and lemony creme fraiche tucked between them, and the resulting stack sliced into wedges,) were even better today. Maybe everything tastes better once the dishes are done.

There were a number of Deaf parents at this morning’s baby swim class, which meant that the teacher acted out all of the instructions rather than just barking them in rapid-fire German. So nice to not have to worry about confusing ‘down’ with ‘drown’! Although my German Sign Language skills are… weak. I only know the alphabet and a few expressions in American Sign Language, and my signs today were confounded by holding a splashing baby. God knows what came across when I tried to sign, ‘Sweet baby!’: spelling it out in German necessitates the use of an umlaut and a ß… I got the usual polite nod and 1/8th smile in response, which is much better than a shocked flurry of ‘that’s SO rude!’ signs, especially as I plan on stalking the Deaf parent community for all of my baby class needs. Imagine a Pilates class with clear signals about which lower abdominal/pelvic floor muscles to flex! In my current class, when the teacher comes close I grunt like I know what I’m doing, but since I just figured out that anspannung (contract the muscle!) and entspannung (relax the muscle!) are not the same word, I’m pretty sure I’m still missing some key instructions.

There will be challenges raising a bicultural baby: language, certainly, and location, and if she pays any attention to financial news at all she’ll be buffeted with battle-ready aphorisms about how the dollar is ‘struggling’ against the Euro or the Euro is ‘weakening’ against the dollar. Pick a side, kid! The thing I’ve been most worried about, though, is humor. It is difficult to grasp humor in your non-native language, and hard to pick up the cues in an unfamiliar culture. There have been times in Germany when I wondered if I was missing the joke, or if the joke just wasn’t there in the first place. Imagine my pleasure, then, in coming across this billboard: 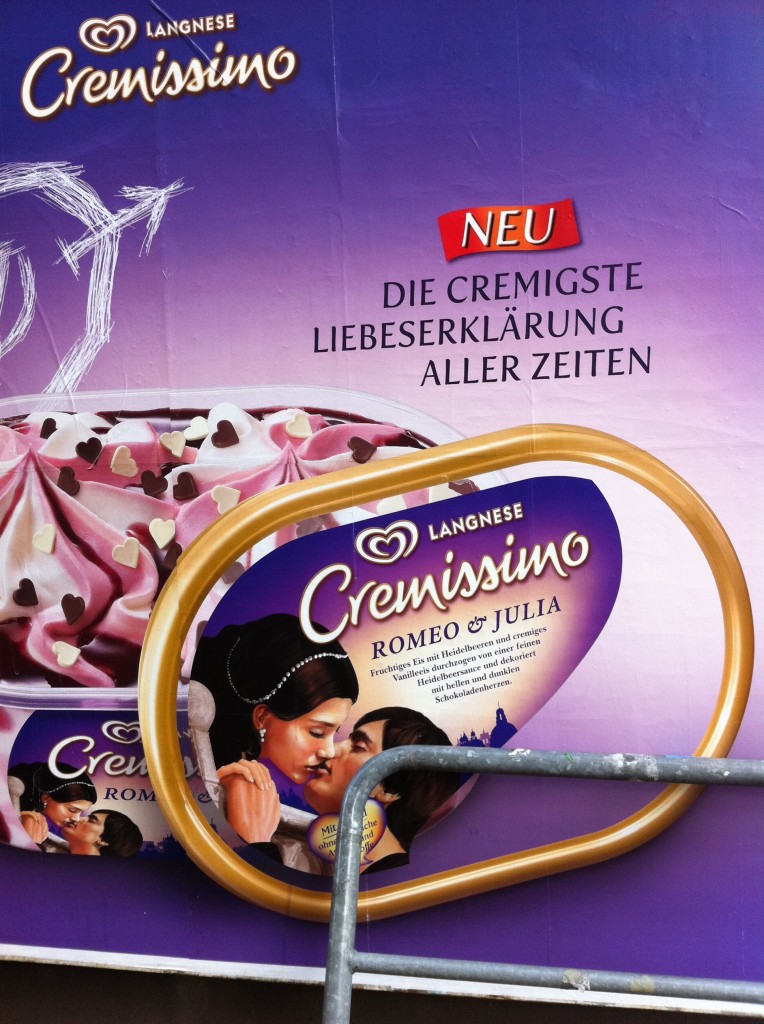 How to play: This billboard is funny in about nine different ways. Which is the funniest? Choose from the options below, or add your own.

Juliet, well done on your apparent escape from the clutches of a berserk defacer of public property.

Romeo, congrats on the ‘long nose’, but you’ve got to think of a way to declare your love that is less… creamy.

Update: I just did an internet search to confirm that this billboard was a prank, and it’s not! Being Germany, the first Google result was a page describing the minute specifications of the packaging. The second listing was an overview of the Romance Ice Cream Series Cremissimo from Langnese, now featuring Casablanca ice cream. Casablanca is white chocolate with creamy (of course) nougat-flavored ice cream, and the website describes the inclusion of chocolate sauce and almond pieces as bringing you to a Happy End.

I guess this is what comes of a country with no ready access to tubs of pre-made frosting. Rather than the romance-novel-friendly spoonful of Betty Crocker Cream Cheese Frosting, you get ice cream in the flavor of Doktor Shiwago.

The blog died for a while, but now it’s back! Thanks very much to Ryan at Please Don’t Bother Us We Only Build Bigtime Serious Corporate Websites But We Fixed Yours For Free Because You Accidentally Got Transferred to the Service Desk and You Seemed So Clueless and Really It Only Took a Minute But Please Don’t Recommend Us To Your Similarly Amateur Blogger Friends Media! Ryan’s company took this website from a blank screen (the result of a failed updating attempt wherein I, noticing that I had clicked ‘Duh, of course!’ button in response to the software’s insistence that I backup the website before updating rather than the more appropriate, ‘Wait, what?!’ button, closed the browser window in panic and reopened it to an eerie silence,) to a fully updated, restored version. I was in the middle of insisting that I compensate him for his time when Ryan gently asked how, exactly, I had heard of his company given that they were based in Sweden and worked exclusively building websites for enormous corporations like IKEA. I realized that paying them for my project would be like throwing a single M&M to a tank of hungry sharks. So, long story short, we’re back, there’s a company in Sweden that will shortly be receiving some homemade cookies, and I still haven’t backed up the website so I hope you’re memorizing every word.

I found a silk tie printed with elephants which was begging to be used: 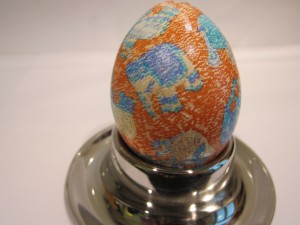 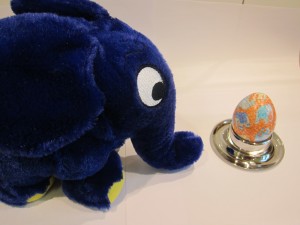 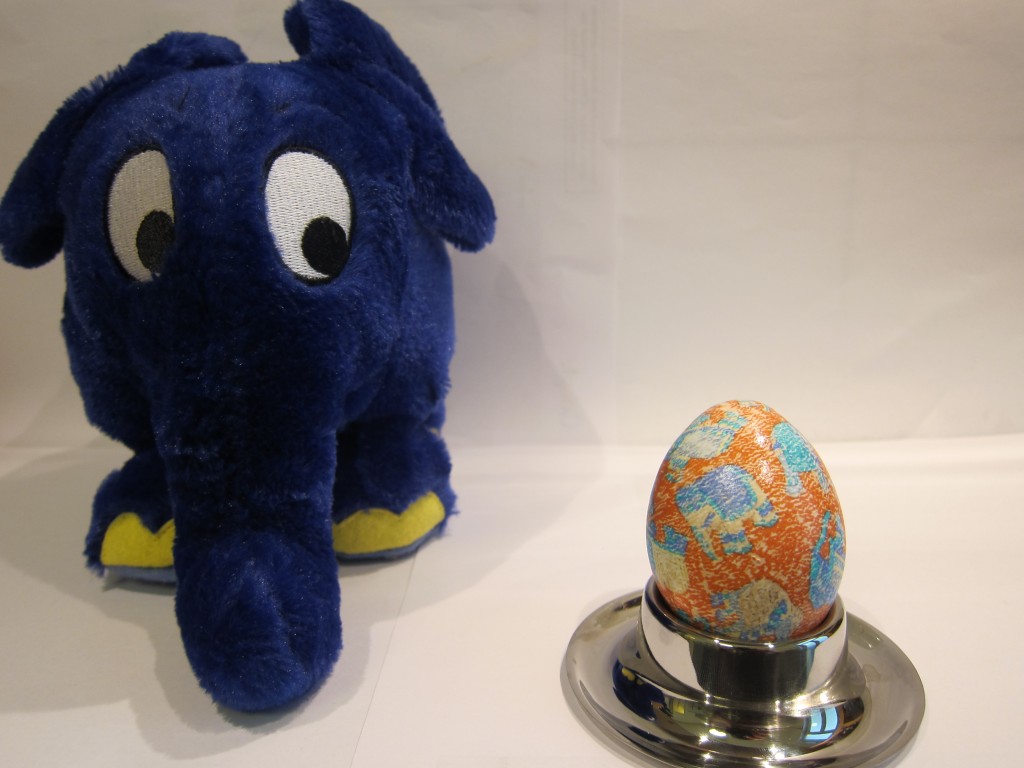 But, wait, I thought I was a mammal?!