Frida and I have an ongoing joke about bragging: at some point during my usual dinnertime haraunging about kids needing to eat two bites of broccoli/liver/whatever, I point to my empty plate and say, “I don’t mean to brag, but I’m really good at eating broccoli. Liver, too, and also cake. I’m pretty good at eating!” The kids groan.

Or, when brushing teeth with kids who are finicky about getting started, “I don’t mean to brag, but I am really quite excellent at putting toothpaste on this toothbrush!” I hand over their toothbrushes and they tell me not to brag, and get started.

Last night, after a bruiser of a day, the kids were climbing into bed, arguing about who’s turn it was to turn off the light. I broke in, “I’m closest to it, and, I don’t mean to brag, but…” Frida broke in, “Mom, no bragging! Everyone’s good at turning off the light!” To which I said…

Now you know what it takes to make a tired 6-year-old run for the bathroom so that she doesn’t pee herself laughing.

I’m not good at everything all the time, no one is, but having laughs with the kids makes it feel like whatever my skills and energy and hope and effort, they’re enough.

Max, sweet boy that he is, asked if I needed coffee this morning. “Probably, but we’ve got to go.” We had an early doctor’s appointment, a 3-hour blood draw at the endocrinologist. I heard him muttering “probably” to himself as I got our shoes on and hustled him into the cargo bike for the 15-minute ride to the medical complex.

An hour later, he’d been given a whopping dose of growth hormone and half a bag of saline in exchange for the first 4 vials of blood. The IV failed during the second round of blood draws, and, after 3 horrifying attempts at restarting an IV, they called it quits and rescheduled us for next month.

My role in this is to prep him for the appointment: no food, lots of water, bring toys, wear comforting clothes, tell him over and over what’s going to happen (it will hurt for a few minutes when they put the needle in,) and what we’ll do afterwards (eat meatballs!)

And to be there during the appointment: count to 20 to let him know what’s coming and when, hold his sweat-slick body down, hard, so that his thrashing doesnt make the needle slide past the vein.

To murmur soothingly that it will be over soon, and to forget that it won’t, really, ever.

In the meantime, I don’t yell at the nurses (it’s not their fault,) or at Max (it’s not his fault,) but I do want to yell.

As ever, the frustrating thing is not so much that I have to do things that are painful and hard, but that I have to hear myself say things like “I need time for self care.” So annoying!

But actually if there’s a mani pedi salon that includes massage and will let me just screamshout FUUUUUCCCCKKKK! the whole time, sign me up! Sounds healing.

In the meantime, I’m yelling it onto the internet:

Fuck fighting about me time!

Stupid tiny needles that aren’t small enough? I hate you!

Expired insurance cards cluttering up my wallet? Get stuffed!

Oh, you already are stuffed? Ha ha, ok thanks for that. 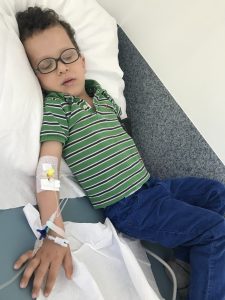 and sometimes he gets to ride on Frida’s magic flying stick! He loves it! All told, he has a good life.

I’ve just done three days’ walking in the Yorkshire Dales. 90,000 steps, most of them in sheep shit. The weather was gorgeous, the locals delightful (one of them opened his inn so that I’d have a place to stay on an otherwise-closed Tuesday,) and the scenery is a dream, especially if you were a James Herriot fan as a kid.

It was the first time I’ve done a multi-day, point-to-point-to-point hike by myself, and the longest I’ve been alone in maybe ever. It’s certainly the most I’ve walked, day after day. I spent five or six hours each day just walking and looking around (and then looking at the map, backtracking, slogging through a wet spot, and rejoining the path.) One, ahem, item of interest, was that during those many hours of walking and walking I was HORNY AS HELL. There was not a tree I went by that didn’t look sexy to me, and the local farmers are lucky to survive unscathed by my ardor. Jeez, man, I could not stop thinking about sex! For hours at a time! Luckily, a combination of lack of opportunity, respect for my family situation, and lack of opportunity kept me virtuous. Also, at this stage that sort of thing is fun to think about in theory and a total drag to think about in practice. (Yes, I would love to imagine x and y and z and yet if I factor in how I’m going to tell my husband about it and how I’m going to live with myself afterwards and how I’m going to get these shorts off in this field without getting sheep shit on my legs and ants in my pants, just thinking about things gets a lot less sexy.) Anyway, it certainly made me think about walking as a pastime in a more curious way and when I came upon another solo lady hiker we literally high-fived as we passed each other and I spent the next couple of miles wondering if the horny-walking-daydream-thing was why.

On Monday Frida Rosenbaum, aged 6, packed her suitcase, kissed her family goodbye, and headed to the beach for 2 nights with her friends.

Oh, also her teachers. When I thanked one of those long-suffering souls for her sacrifice in taking our kids for 72 hours straight, she told me that she is neither suffering nor sacrificing – it’s a time together that they all look forward to. I blushed, remembering that she took this job because she likes it and is good at it, not because selfish parents like me ‘need a break’.

Preschool workers in Germany are not babysitters in the same way that fathers are not babysitting when they are parenting. German preschool teachers have extensive training, 3-year-long internships, paid vacation, and the respect of the community. Like other professionals, they expect to work in their field for the entirety of their career: Frida’s teacher has been teaching at the same school for 20 years.

Frida woke up at 5:00 the morning of the trip, said, “Mom, I have Reisefieber” (vacation fever – don’t you love German?!) and went off to double-check her toiletry kit. Last year, Frida came back so stinking proud of herself! At the beach, she put herself to bed and got herself ready in the morning – things that have been a struggle for us at home. This year, she plans to help the little kids brush their teeth if they need a hand – she’s been practicing with Max (whose heart problems and general delay mean that he’s staying home. Maybe next year.) Kids who are 3 and up go on the trip (after a practice overnight at the preschool,) as do all of the teachers and staff aides and the school’s administrator. No parents, though, as that would defeat the purpose.

The German system isn’t cheap, but it’s paid through the city government so everyone pays, via taxes, according to income. The moral of the story? Pay your taxes and you will be richly rewarded. And by rewarded, I don’t mean with 72 hours of kid-free time, I mean rewarded with a kid who comes back grubby, full of amazing stories about the shells they found and dancing at the disco party the last night, and confident in her budding independence.