As I was recutting the stems of some tulips last week I thought, ‘this parenting gig is not so tough.’ There are some concessions: I’ve been making simpler recipes than before (baked maple/walnut french toast with store-bought bread rather than individually bronzed slices of homemade challah, and purchased smoked salmon on pumpernickel with lemon/herb cream cheese rather than home-cured lox in savory crepes,) and I’ve been getting pretty lax about what goes in the dishwasher vs. what is lovingly washed by hand (wine glasses get fairly clean even when one of their cycle-mates is a lasagna pan.)
It helps that the baby sleeps fairly well, and eats very well. It certainly makes a difference that I’m old enough to keep calm in any number of minor storms.
If I’m being honest with myself, though, I can’t really take much credit. What really makes life easy for me is this: 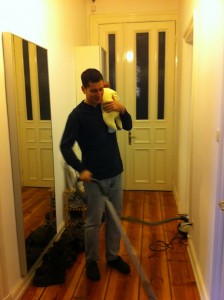 —————————————————————
Thanks to the Ayudador, I’ve been out and about quite a bit these last few weeks. I know that the premise of this website is that we discuss food and eating, so here’s a list of places that Ida has breastfed lately:
-bathroom at Vietnamese restaurant
-museum cafe
-train platform
-booth of an Italian restaurant
-friend’s living room
-Department of Motor Vehicles waiting room

I could go on, but nothing’s going to beat that last one.

One of the cruelties of living in Germany is the lost opportunity for breastfeeding humor: no one laughs when, while preparing to breastfeed in public, I say, in my very deepest and most authoritative voice, ‘Excuse me while I whip this out.’ This doesn’t stop me from saying it, but it does make me miss my brother. George, come visit quick – I’m in danger of forgetting all my good Blazing Saddle quotes. 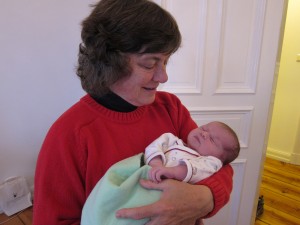 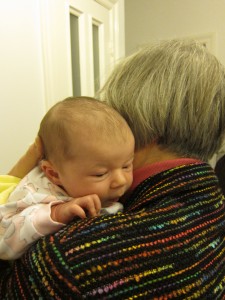 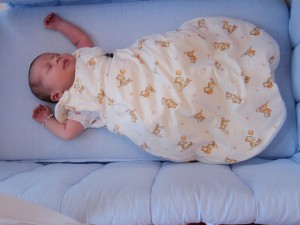 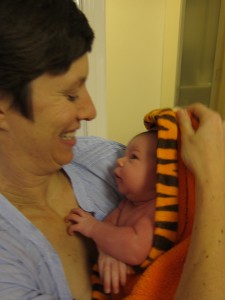 Her Face Says 'Thanks', Her Hand Says, 'For Nothing You Asshole!' 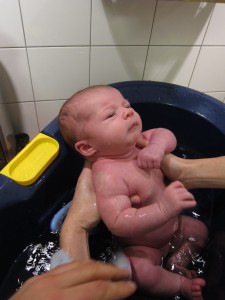 You Cannot Wash Away My Dignity

Some things are happening pretty fast here at Frida HQ. The babe is turning her head from side to side, sleeping for three hours at a stretch, and quickly outgrowing newborn-sized diapers and clothes. It’s fun to watch the changes happen, not only to her but to me as well. Let’s play…
Transitions
In the following list of befores and afters, guess the space between.

Before: Ugh, my stomach is queasy and nothing sounds good, but I have to eat or else I’ll get even more nauseous. What sounds least revolting? Crackers?
After: I can’t believe I forgot to bring a snack to the breastfeeding chair again. I’m starving. Hmmm, I wonder which domesticated animal would I eat first? A fat juicy snake? A nice meaty labrador? Certainly not a cat. Eewww. That makes me want to brush my teeth.

Before: That has poop on it. It’s dirty and I am putting it in the laundry immediately.
After: It’s just a tiny little fleck of poop, and this shirt just got washed…

Before: Onions and garlic might give the baby a tummy ache, so it’s best to avoid them during the first few months.
After: Oh, yum, Korean food!!

Answer: You can imagine.

The baby’s crying so I’m going to see if she can be placated with a combination of breast milk, motherly love, and the soothing tenor of my light snores. 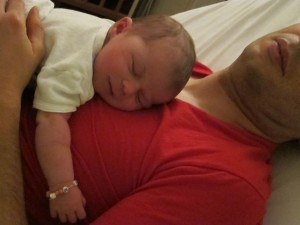 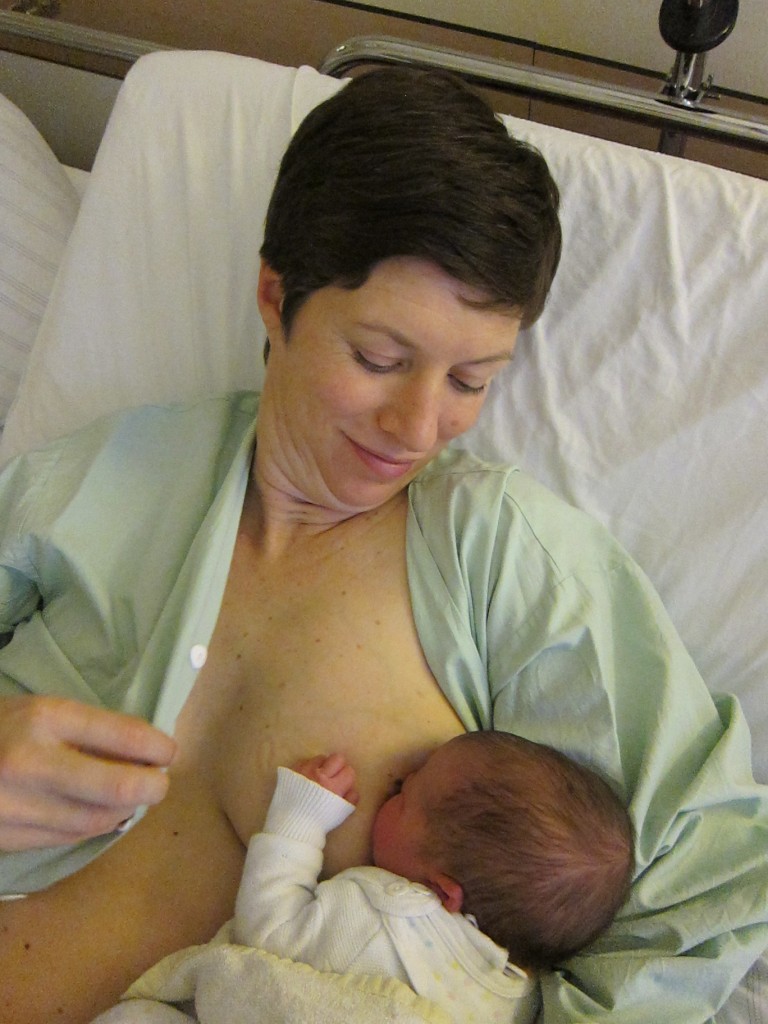 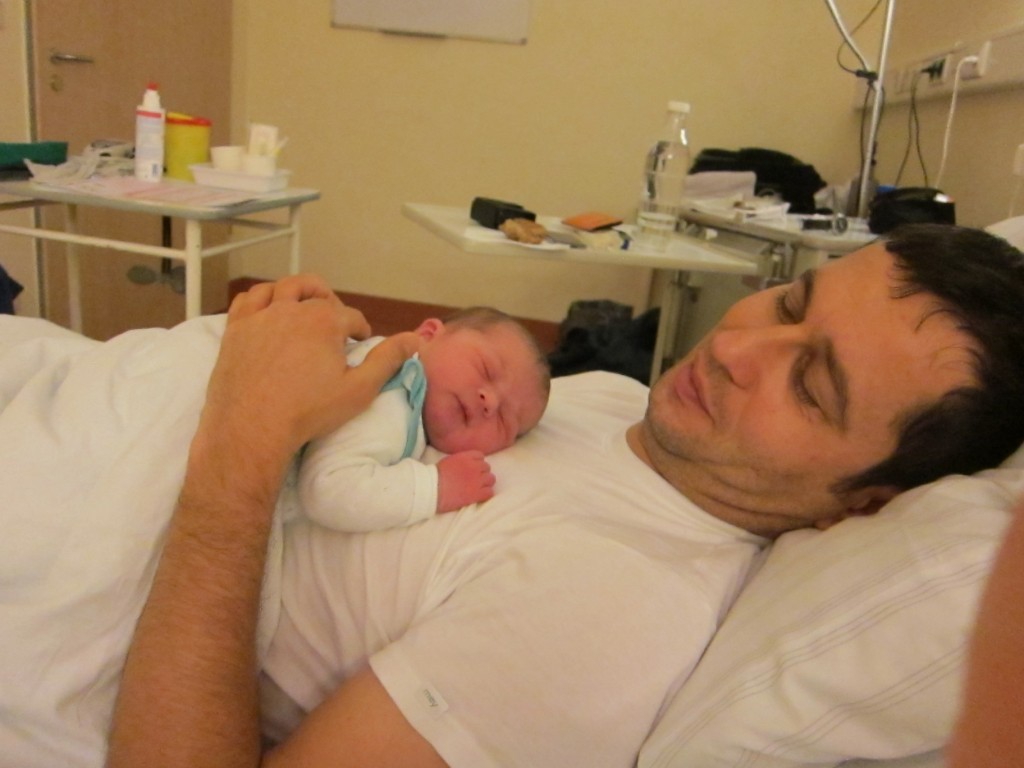 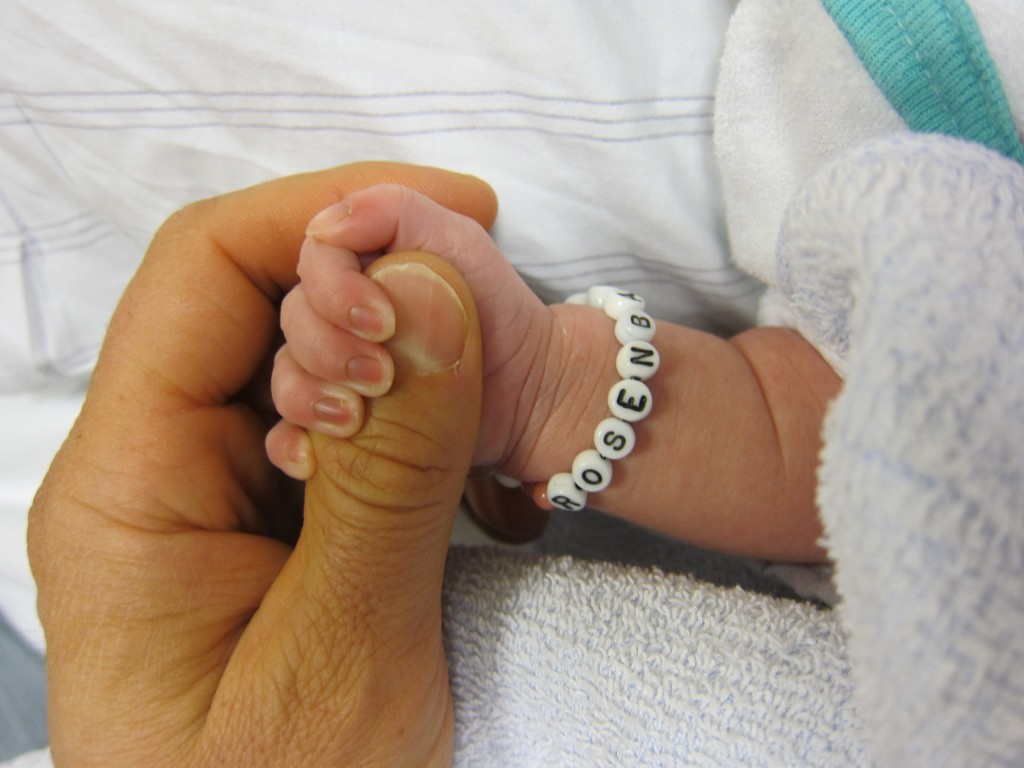 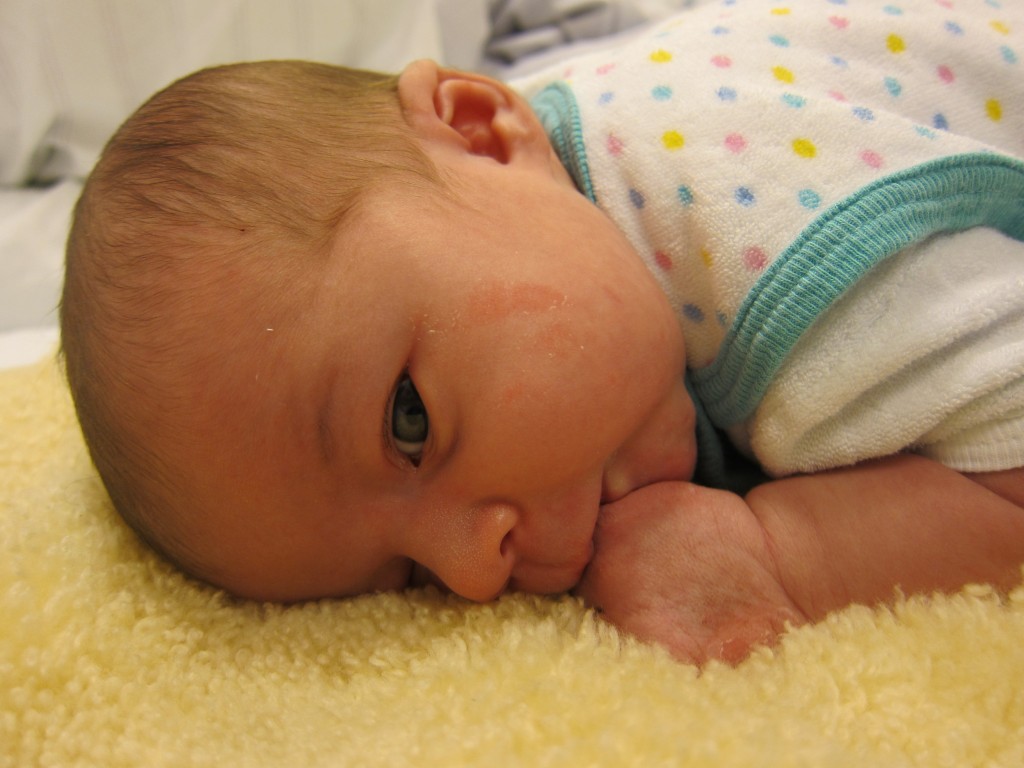 What do you do if your carefully-laid plans for New Year’s Eve fall through*? You gladly accept the invitation to a last-minute dinner with friends, and you make some last-minute treats to bring along.

*My plan was to spend the evening breastfeeding at the beck and call of my newborn. She stood me up, and in fact has yet to arrive.

The following pictures demonstrate the Monet effect, as the little gingerbread houses are perfectly charming en masse, from a distance, but a bit scraggly up close. 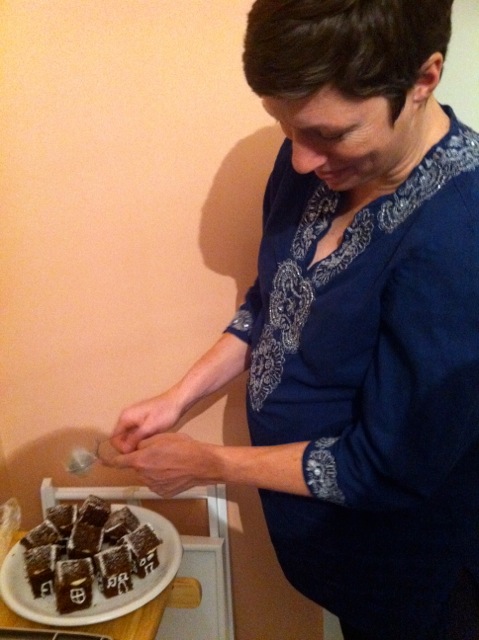 As the frequent reader may have already noticed, I love that shirt! We’re down to a three-shirt rotation at this point; good thing all of them go very well with the yoga pants that are my constant companions. And now for the close-up: 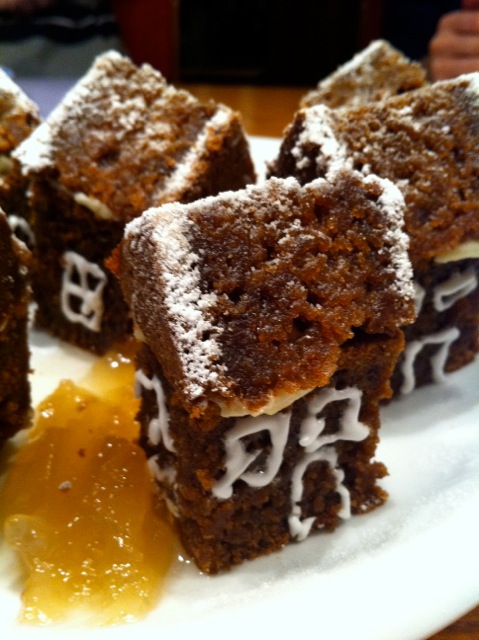 Crying A River of Applesauce

That gingerbread house is tore up. It looks like it is both screaming and crying, probably because its roof is eroding and its brain is leaking down its face.
With that sort of scary detail, you can surely appreciate why this morning’s full-body picture is taken from a discreet distance. 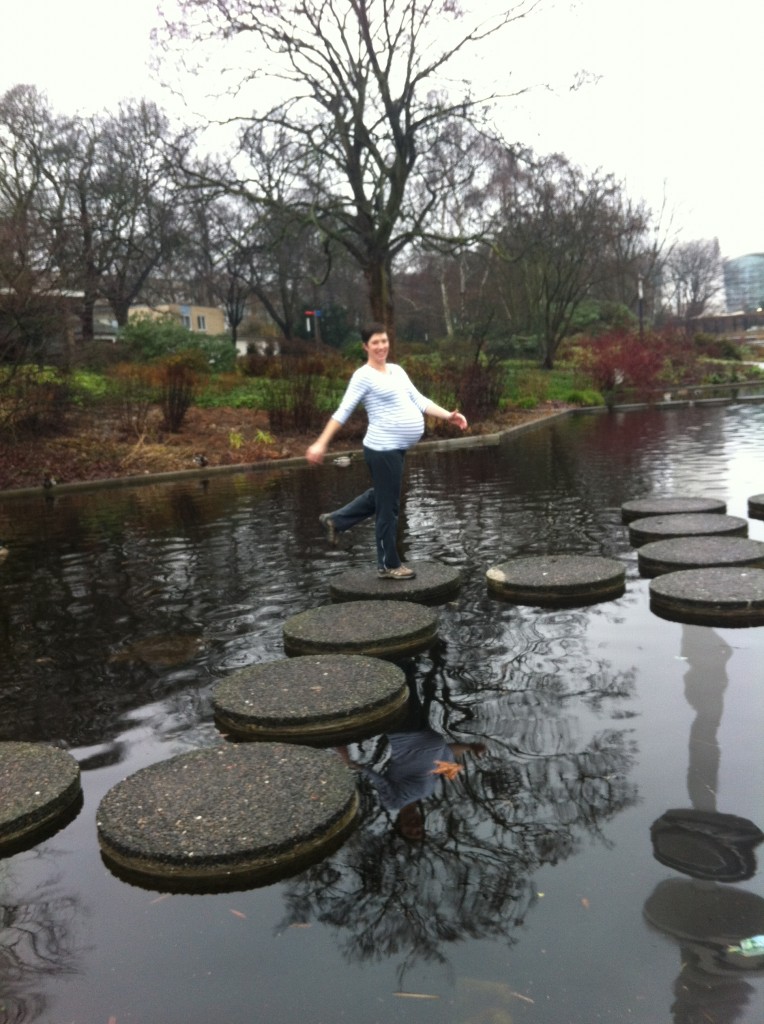