You know how a really good, cold glass of lemonade on a hot day can feel like it’s refreshing your very soul?
And remember the last time you had buttermilk, when you thought, ‘this is the perfect snack when I’m hungry but I don’t know what I’m hungry for! Why don’t I have this more often?’
I don’t think that it’s a coincidience that the following events happened simultaneously:
• It was hot
• I was hungry
• I needed something refreshing, healthy, and quick
• It was THE RAPTURE
• I drank lemon – flavored buttermilk for the first time.

The German has recently been upgraded to baby daddy, and I have seen my likelihood of being murdered increase a hundredfold, as I am now officially a “pregnant girlfriend”. As in, ‘pregnant girlfriend shot in what officials consider gang-related shooting spree’, or ‘stabbing victim identified as the pregnant girlfriend of local mayoral candidate’.
Not that the German is running for mayor, or that he’s in a gang (although his bicycling club totally wears matching unitards.)

Dear Betsy,
Please go to the grocery. We are very nearly out of crackers, ginger tea, and mango lassis. And protein.
Sincerely,
Your Fetus.

Dear Fetbryo*,
No way. It’s raining out, we still have lots of cherries, plums, and ice cream, and based on how much we’ve been sleeping lately I don’t think we need more than 10 calories per day.
Betsy

Dear Wee One,
That’s why God (can’t remember if that’s Ben or Jerry,) made ice cream with peanut butter in it. Afterwards, let’s take a little sip of balsamic vinegar to reduce the glycemic index of ‘dinner’. Tasty!
Mom

Mom,
I am about to give you heartburn like you never thought possible. Also, I will make you crave Robins Eggs like the dickens even though you are 4,000 miles and 11 months from being able to get your hands on any.
Best,
Your Robins Egg-Sized Fetus of As Yet Undetermined Gender.

Tiny Trouble,
FINE. I will go to the grocery. What do you want?
Betsy

Betsy,
I don’t know yet. Let’s wander the aisles aimlessly until I figure it out.
TT

Well, not the end… but the end of that particular conversation.

*As your hilarious Aunt Shelly calls you.

Early this afternoon, after a hilarious visit to Miniatur Wonderland, I threw up a healthy breakfast of meusli, milk, raspberries, and lots of water. Immediately after, I remembered that the Bretagne creperie was just around the corner, so George and I headed there for lunch. Following the sage advice of my instincts, I housed a crispy buckwheat crepe with Emmentaler cheese, dried smoky ham, pears, gorgonzola sauce and walnuts. Not wanting to overdo it, George and I decided to share a dessert crepe: bananas, ice cream, chocolate sauce, whipped cream, and toasted almonds. We then went up 75 meters in a glass-walled, very fast elevator. I felt fine. Or fine-ish. Mostly fine, though, and I didn’t hurl – not even in my mouth.
Now we’ve arrived home, I’ve had a more sensible snack of bland crackers (with Nutella) and a sports drink (grapefruit flavor, and carbonated, oddly,) and I feel sick again. Ah, well. Apparently this stuff is out of my control.

George is awesome for so many reasons. Here is a smattering of reasons from today: he found whatever was rotting in the fridge and cleaned it out (his guess was that it was rice pudding with tuna, at least two weeks old,) he went to the German grocery all by himself to get crackers and ginger ale (after a year here the grocery still intimidates me,) and he cracks me up even when I’m sniffling from the embarrassment of puking in public.

Tomorrow we’re off to see one of the German’s huge windmills, whose grandeur I hope will somewhat distract from the wretchedness of my hostessing.

A t-shirt I saw in the parking lot of the HEB grocery store in Austin a few years ago had huge white letters on a black background. The guy wearing it was Hispanic, urban, and in his early 20’s. It said:

NO NOS PUEDEN DEPORTAR A TODOS

I was, and still am, thrilled by the combination of humor, political message, and bravery. I laughed my ass off when I saw that T-shirt, and now, years later, I am sad to not see thousands of them walking around. The immigration situation is so fucked up in the U.S. (nowhere near enough visas to allow people to work legally, ridiculously harsh punishments when people work illegally,) that it is difficult to talk about, much less to affect any real solution. There are absurd laws introduced every year in Texas – laws that would make it illegal to speak Spanish in public, laws that deny emergency healthcare to people based on where they were born, laws that would make it legal to shoot at Mexicans just for being Mexicans who want to live in the U.S. It makes me sick, and there’s not enough that’s funny about it. I am glad for that T-shirt, glad that one person could send the message that not only are immigrantion policies off-base, they’re hilariously off-base, and that there is public solidarity in the immigrant community and a potential for solidarity across immigrant and non-immigrant communities.

The English translation of the t-shirt is ‘they can’t deport us all’, and it is right. It’s embarrasing that the ‘they’ were Indian-murdering immigrants themselves not so very long ago, and it’s time to stop wasting tax-payer’s money on deportation. Let’s write our congresspeople and encourage them to increase the availability of visas rather than the punishment for illegal immigration, and let’s thank the people who are keeping our economy running, even if they’re working illegally. And let’s not even talk about that ridiculous fence.

With that, I’m off to board my plane to Germany where, as of May 2nd, when my temporary resident visa expired, I am an illegal immigrant. This post is going to be especially hilarious when I get deported.

This morning I got to the Minneapolis airport in time for breakfast. Oh, joy, I thought, another bland, fatty, disposable airport breakfast. I was feeling finicky; what I really wanted was some ice-cold plain yogurt with blueberries, a poached egg with tons of pepper, and some hot buttered rye toast. Here’s what I ended up with:
-blueberry smoothie, not too sweet
-ice-cold plain yogurt, just the right combination of creamy and sour
-two poached eggs, perfectly cooked
-an endless supply of pepper
-hot, buttered, bakery-fresh rye toast

So I wiped that look off my face and dove in to an incredible airport breakfast. The toast was so good that people were buying loaves to take home with them, and the smoothie had added fiber (always a good idea, but absolutely key when travelling.) The name of the restaurant was French Meadow, which is misleading in that you will be breakfasting at a vinyl booth in an airport rather than, say, in a meadow in France, but I am happy to forgive them the stretch because the feeling of contentment the restaurant produced was as good as a nap after a picnic in said French meadow.

On the flight to Minneapolis, I reached into the seat pocket in front of me, pulled out the airline magazine, flipped to the crossword, and was mildly annoyed that someone had already started it. I hate having to review other people’s answers to ferret out their mistakes before getting started with my own. When I looked a little closer, though, I realized that the handwriting in the magazine was mine! I’d filled it out earlier in the month on a flight to Denver or Austin or Chicago. Small world, there, in seat 2D. My seatmate and I had a little laugh about the coincidence, I pondered my upcoming reduced-travel lifestyle change, and then I went back to fixing the mistakes in the crossword puzzle.

The rookie mistakes:
-ordered the chicken feet 3/4 of the way through Sunday’s dim sum. Was already too full to enjoy their texture
-forgot that Austin wakes up late, almost died of starvation waiting for coffee/smoothie shops to open
-put on winter-grade lotion in the 100-degree heat, felt like I had melted saran wrap onto legs

I love it here, but I am out of practice. I thought the chili on the airplane coming into Austin tasted spicy (note: airplane chili is not spicy. It’s just not.) I wear a scarf and then swelter. I am surprised when there’s traffic. I threw away four plastic cups today. Corn cups, yes, but it still felt weird.
I’m off to Minnesota tomorrow, glad to have had a weekend here to both catch up with loved ones and to soften the blow of returning to the land of friendly strangers and fried-cheese-as-appetizer. I’m glad to have had a long weekend with joyous types to get me a little more ready for the smiley politeness of the next stop: the combination of proximity to the Mall of America and that much ready good humour would have made for a startling transition from Germany indeed!

Mom and I have a long history of cracking ourselves up through staged pictures. The original featured her head sticking out of our mailbox. It was shockingly funny and pretty darn creepy. This is a continuation in the series: 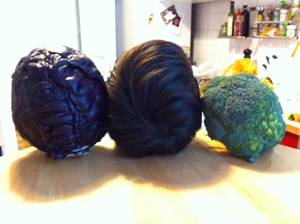 Here’s another view in case you’re stumped. (It’s still not a raisin.) 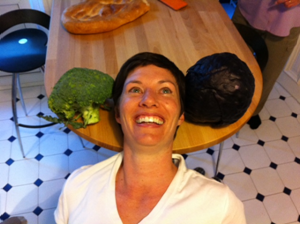